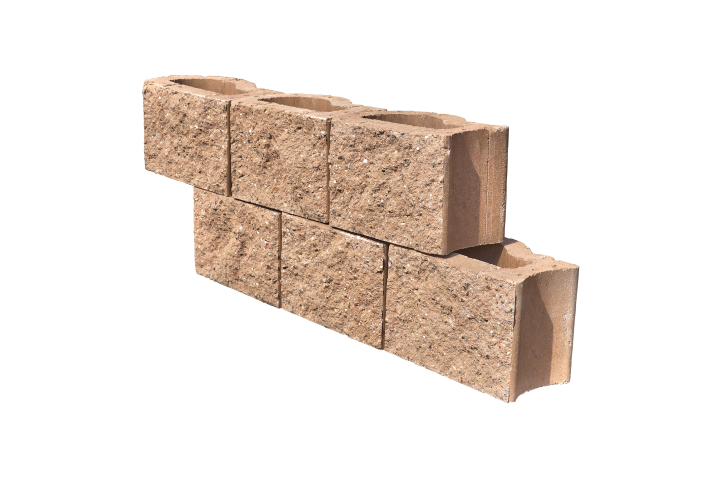 A special feature of the new VR18 retaining wall block is that it is reversible, with different finishes on either side. “This new product has been a few years in the planning. It was a difficult mould to make, which was produced by PMSA’s Cape Town office,” says Anthony Gracie, MD of Cape Brick.

Cape Brick has enjoyed a long association with PMSA, recently installing a supervisory control and data acquisition (SCADA) system at its Philippi facility to serve the mixing and block plants on an integrated platform.

The SCADA system displays visual, animated graphics of machine operation, machine parameter control and data capture. “It has proven to be a tool that we cannot run without, as its advanced and interactive efficiency increases daily manufacture by between 10% and 20%,” comments Cape Brick director Jacques Tresfon.

Established in 1938, Cape Brick is the longest-established manufacturer of quality concrete masonry in operation in the Cape. “Our comprehensive product range includes standard masonry products such as all sizes of bricks and blocks, as well as retaining wall blocks and decking blocks,” Gracie explains. “In October 2009 we introduced our range of wet-cast paving products, featuring over 300 different modules in a wide variety of colours and textures.”

Cape Brick operates a brick-and-block facility at Philippi and Blackheath and a wet cast operation producing slabs and cobbles. PMSA equipment in operation at Philippi includes a VB4X block machine, a P1500 mixer and an insulated racking system, among others.

“We typically make up to 600 t of product a day in a double shift at Philippi, and 180 t to 200 t in a single shift a day at Blackheath,” Tresfon confirms. A unique feature of Cape Brick is its extensive use of recycled material in its production.

“We have an extensive crushing operation that prepares about 300 t to 400 t of aggregates a day in order to supply our facilities. While it is easy to use 10% to 20% recycled material, once you go beyond 30% to 40%, there is generally a big drop in quality. Therefore we have developed a lot of intellectual property in upping our recycled content to 70%,” Tresfon highlights.

PMSA has played an ongoing role in the company’s development, especially when it relocated its facility from Salt River to Philippi. “We basically rebuilt the plant. We retained the VB4X block machine and switched from a P1000 to a P1500 mixer. We fully automated the mixing and installed a new moisture control system, as well as rebuilding the entire racking system.”

Cape Brick is now able to handle 4 200 pallets in the factory, as opposed to 3 000 previously, which continues to give it an edge in the highly competitive and quality-conscious Western Cape market. “We carry out a lot of affordable housing work, while also have the biggest reseller network in the region,” Gracie elaborates. “We cater from the home renovator up to big projects, as well as having a large walk-in, cash sale market.”

Tresfon says that the investment in the latest technology from PMSA has allowed Cape Brick to focus on its mandate of providing the best quality products. “Our strategy is that quality is non-negotiable, our customer service has to be the best, and our pricing has to be competitive.”

The use of recycled aggregates does mean more abrasion and friction on the equipment, but overall the production costs are lower. “In order to be able to incorporate recycled aggregates effectively, you need to have a major crushing network. That by itself is a major investment.

“Then the moulds used in the production process have to be good. I have spent a lot of time with the Cape Town branch of PMSA developing our moulds. We are now at the point where these moulds are giving us the lifespan, durability and efficiency that we require.

“Our relationship with PMSA has been fantastic. It always provides the necessary back-up and support, and is ready to provide a solution for any specific requirements. That has been of immense benefit to us, and a critical factor in our continued success,” Gracie concludes.

Thank you for your interest in CAPE BRICK. Please contact us, or request a quote.